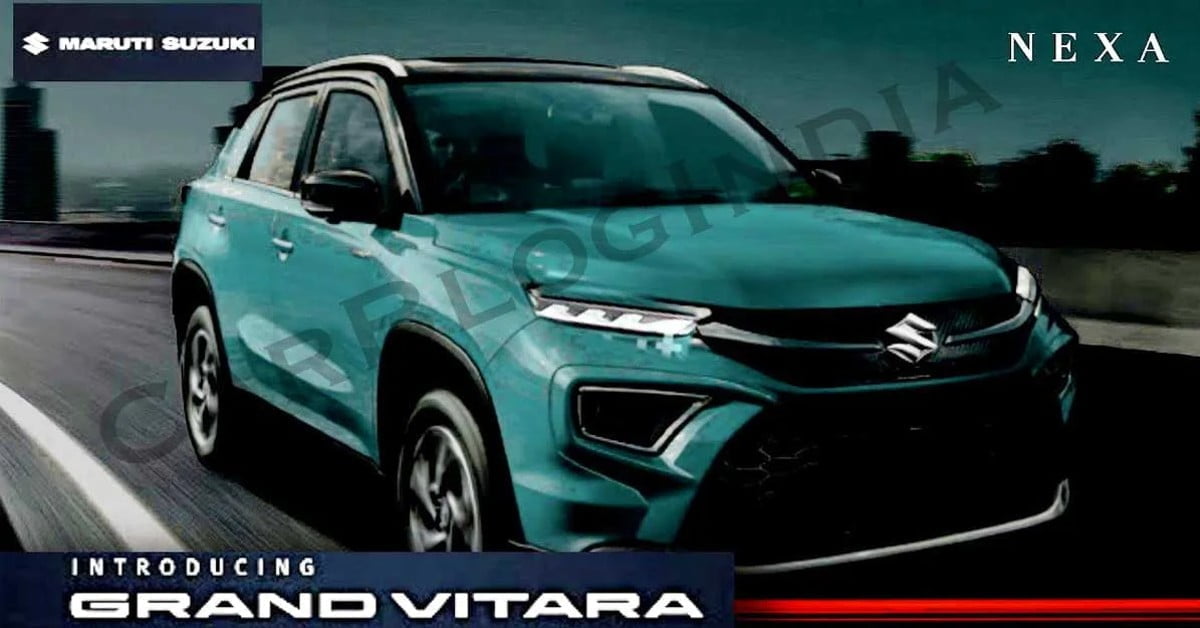 Days before Maruti Suzuki officially reveals the all-new Grand Vitara, a picture of the upcoming vehicle has leaked.

The all-new Grand Vitara will be revealed officially on 20th July, a few weeks after the all-new Toyota Urban Cruiser Hyryder.

Carblogindia has posted a picture of the all-new Grand Vitara without any camouflage.

The design seems to be very similar to the Toyota Urban Cruiser Hyryder but with Maruti Suzuki-specific changes including a tweaked grille design.

A few days ago the base price of the upcoming Maruti Suzuki Grand Vitara is Rs 9.5 lakh, which will undercut Hyundai Creta.

Maruti Suzuki will reveal the prices of the car and also the complete variant list of the model next week.

The new Grand Vitara’s front-end gets a new crystal acrylic pattern that extends to become the twin-DRLs.

The main cluster lamp is located down below the bumper.

Even the rear gets sleek LED tail lamps that look very similar to the twin DRLs.

Incidentally, both these cars will be manufactured by Toyota at its Bidadi plant in Karnataka.

Both the cars share the same platform and will get the same engine options as well.

Toyota recently revealed that the all-new Urban Cruiser Hyryder will offer hybrid engine options and an AWD system as well.

Just like the Toyota Urban Cruiser Hyryder, the Maruti Suzuki Grand Vitara may offer a strong hybrid option and AWD system as well.

It will come powered by the same 1.5-litre petrol K12C DualJet engine that also powers the new XL6 and the new Brezza.

The Neo Drive gets a mild-hybrid set-up with an auto start/stop and regeneration system.

A stronger hybrid architecture is available too.

It is a proper high-capacity hybrid system with a 177.6V lithium-ion battery pack.

The Toyota Urban Cruiser Hyryder gets a 1.5-litre Atkinson Cycle engine that produces a maximum power of 92 PS and a peak torque of 122 Nm.

It gets a 14:1 compression ratio and temperature and pressure control to help achieve a thermal efficiency of 40 per cent.

The engine is paired with an electric motor that produces a maximum of 79 PS and 141 Nm.

The strong hybrid power plant produces a maximum of 115 PS of combined power.

We can expect exact similar specs with the new Grand Vitara.

The source code says the SUV’s ex-showroom price is Rs. 9,50,000/- and this should, most probably, be the price of the base variant.

If it’s truly so, the Grand Vitara base variant will be cheaper than Hyundai Creta’s base variant by almost a lakh Rupees.

This trend might be followed for all variants under-cutting the segment best seller and offering maximum value. Also, the Grand Vitara will have 2 main advantages over the Creta.

One will be the presence of all-wheel drive system and the other 1 will be the addition of a hybrid powertrain.

But, Creta also has its own advantages namely the diesel and turbo petrol engines and the host of automatic transmission options.

It would be a fiercely fought battle between the 2 in the coming days.

Ahead of the unveil on 20th July, the trims of Maruti Suzuki Grand Vitara have been revealed as well.

They include the normal IC only trim and the unique hybrid trim named ‘Intelligent Electric Hybrid’.

This is quite similar to Toyota Urban Cruiser’s 2 trims – Neo Drive for the IC variants and Hybrid for the hybrid variants.

Maruti Suzuki has used the word ‘intelligent’ as the hybrid system can be made to work automatically or drivers can also force the car to run on pure electric power.

One of the non-hybrid variant will sport Suzuki All Grip all-wheel-drive system.

The overall silhouette looks almost similar to that of the Urban Cruiser Hyryder and the international S-Cross.

Bookings for the SUV are already open for a token amount of Rs. 11,000/- at all Nexa dealerships.

The car will be exclusively sold through Nexa channels.

Buyers can also book online by logging on to www.nexaexperience.com.

Deliveries are likely to commence from August or September.

The car is expected to become a truly global product with exports planned for Europe as well as Africa.

It will replace the current international Grand Vitara for which a generation change has been long overdue.

Developed jointly with Toyota, the all-new Grand Vitara is essentially the Urban Cruiser Hyryder’s cousin sharing almost everything with it.

Both the SUVs are built on Suzuki’s Global-C platform that currently underpins the Brezza, Ciaz, S-Cross, the new international S-Cross.

Aave proposes the creation of a stablecoin called GHO

Ethereum Fees Drop to the Lowest Range Since November 2020